According to Allen Owings, LSU AgCenter Horticulturist, crepe myrtles don't always have to be pruned. He says that they are often "butchered" for no reason, often known as "crepe murder" and the tops are "loped off." This can cause them to be structurally weak and is more susceptible to fungus diseases such as powdery mildew. The best way to prune crepe myrtles is to take a look at them and see the branches that need to be pruned. "Examples of appropriate reasons for pruning include eliminating crossed and rubbing branches, removing low branches, removing weak, thin branches from the inner part of the tree, trimming off old seed pods, creating a shapelier tree and keeping suckers removed from the base of the trunk." For more on this topic, you can go to the LSU AgCenter article here.

Reported Wednesday, December 19, 2018
We are sad to announce the passing of David Austin Senior on Tuesday. He died peacefully aged 92 at his home in Shropshire surrounded by family.

David Austin's firm has introduced over 190 rose cultivars and has four groups of roses including: the Old Rose Hybrids, the Leander Group, the English Musk Roses and the English Alba Hybrids.​
​ 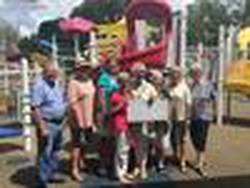 2017
​
The Livingston Parish Flood Project began as a response to the stories of anguish and destruction occurring following several floods in the spring of 2016. And, it was obvious that housing and basic services were the immediate needs for people bereft of homes, clothing  and food. As cleanup efforts began, more and more the enormity of the issue became apparent.  Although home and business cleanup was the first line of attack, landscapes were obliterated too. And the ugliness of the whole community was in plain sight everywhere.

About that time, considering the human anguish and landscape damage in this parish, the Northwest Louisiana Master Gardener Association approved a project to partner with Ouachita Parish and Webster Parish Master Gardeners to raise money for direct aid to the Livingston Parish Master Gardeners. The aim was the restoration of  landscaping in their community where families found pleasure and fulfillment.  One of those spaces, flooded and no longer useful as a playground, had been a major project of the Denham Springs Master Gardeners and the Pilot Club of Livingston Parish. It was the Kidz Corner Playground, an area where children of all abilities and special needs could learn and play in a safe playground.  Now, like the rest of the community, it was a disaster. There was no contingency funding to restore this park, The LSU Ag Center Parish Agent/Master Gardener coordinator, Kenny Sharpe suggested that Livingston Parish was in desperate need of financial assistance for this well used, but under-funded project. All three of the partnering Master Gardener Associations concurred in donating their fundraising efforts to this project. We began passing the hat and collecting donations.

The first phase of the project, collecting funds, ended August 17. On August 22, to complete the project, master gardeners Tina Kendrick and Lou Osburn traveled to Denham Springs to present a check to the courageous people of this region, enough money to continue funding the restoration of the grounds of the Kidz Playground.

August 22nd on a steamy hot afternoon on the Kidz Playground, where our associations came together check in hand. Although the check was signed by NWLAMG Treasurer Steve Roberts, the funds had been derived from the generosity of Piney Hills, Northeast and Northwest Louisiana  Master Gardener Associations.  On this hot afternoon, the misting system was in full force on the ‘‘wet” area of the park, and children and parents were playing in the spray.
Under the pavilion, Denham Springs Master Gardeners and members of the local Pilot Club International gathered for a small ceremony to receive a gift of money to restore landscaping in the Kidz Playground. Northeast Louisiana Master Gardeners, Piney Hills Master Gardeners and Northwest Louisiana Master Gardeners have collected donations for this playground since last October to help fund landscaping restoration in the park. And YOU have been a part of this restoration endeavor!

To the surprise and utter delight of Master Gardeners and Pilot Club members, the check donated to the Kidz Park amounted to $4,320!  These dollars will purchase benches, trees, plants and hardscape for the drowned park, returning it to a place of beauty and service for the whole community of Livingston Parish. Delighted smiles, thanksgiving and happiness filled the pavilion. You have brightened the day for people who have suffered a great loss. Thank you for helping make this gift possible.
Thank you for your generosity, Northwest Louisiana Master Gardeners.
You donated $2000.00 for this project.
Tina and Lou
​